Deep in the heart of Gansu Province in northwestern China lies the hole-y grounds (pun totally intended) of the legendary Mati Si, or Horse Hoof Temple as it translates in English. The temple is less of a temple in the traditional sense of the word, and more of an entire mountain carved into a temple made up of thousands of grottos, sort of like the ancient Chinese version of Mt. Rushmore. Except it’s not really Chinese either, more like Tibetan. So basically think, Tibetan holy mountain carved into a temple in what is now China and you’ve got a pretty good grasp on the place. It’s unique on a whole other level.

The legend of Mati Temple dates back to China’s Eastern Jin dynasty, which lasted from 317-420 AD.  The story contains many familiar elements, telling of a Pegasus who flies down from the heavens to leave a hoof print on the temple grounds, hence how it got its name Mati Si, which directly translates to Horse Hoof Temple in English. You can still see the hoof print inside the main hall of the temple.

The temple is located inside of Mati Si Scenic Area, 65 km south of Zhangye City.  The scenic area houses a collection of grottos and temples all set among the beautiful snow-capped Qilian Mountains. The scenic area itself is broken down into 2 sections: Mati Si and Thousand Buddha Temple, each requiring a separate entrance ticket.

Other places to see in Zhangye:

If you didn’t already guess based on the fact that the entire scenic area is named after it, out of all the temples and grottos in the area Mati Si clearly steals the show. The sheer size of it is amazing. The pagoda shaped temple climbs up over 60 meters of sheer cliff face and houses 7 floors consisting of 21 grottos in total. The entire interior of the cliff face has been carved out creating an elaborate maze of tunnels, steps, and caves, among which stand 200 Buddha statues carved over hundreds of years.

We had a blast climbing through the mountainside and discovering all secret shrines and statues hidden within. If you’re someone who enjoys exploring caves, then this is your dream temple. Seriously. We did just as much crawling, climbing, and sometimes wriggling as we did walking in the temple.

If you’re a larger person you’ll probably encounter some difficulty and find some passages impassable. The temple was clearly designed with tiny Tibetan monk bodies in mind. I mean, I guess we can forgive the Tibetans for not building their place of worship to fit the needs of us foreign tourists.

If you’re claustrophobic you should probably just sit this one out, unless you enjoy having panic attacks. With the exception of the first hall on the ground floor, the whole inside of the temple is a labyrinth of tunnels and tiny grottos of which there is just a single entrance and exit, and in typical Chinese style, there is no control over the flow of traffic. Which means in a single body wide tunnel there might be people trying to come down as you’re going up, which leads to both parties getting quite friendly with the walls behind them, and probably each other as well. Don’t say I didn’t warn you.

Luckily, visiting Mati Si in the offseason meant we were spared the pleasure of having to rub bodies with a bunch of strangers crawling through a tunnel, but we’ve heard stories. Not that we would let that stop us. It is totally worth any awkward stranger in a tunnel interactions you might have the chance to explore a temple carved out of an entire 60+ meter tall cliff face.

Also located in the same section of Mati Si Scenic Area as the famed Horse Hoof Temple itself is King Gesar’s Palace, a single grotto dedicated to King Gesar, a famed ancient ruler who vanquished all evil from the land. The grotto is approximately 70m long, 12m wide, and 3m tall and contains statues of King Gesar and his 36 generals, all on horses bearing weapons ready to fight off any impending evil.

Horse Hoof Temple is surrounded by some of the most stunning alpine scenery, that luckily if you have the time you can explore a bit after you’re done in the temple itself. The driveway ends at a parking area where you can get out and walk a 7km round trip to see the Linsong Waterfall. During peak season it’s common to take a horse ride to the waterfall. Making the trip on horseback will cost you about 100 RMB.

Unfortunately, we had, shall we say, a not so nice driver who was not keen on waiting for us to walk to the waterfall and back, and if we did so was prepared to charge us a boatload of extra money. Needless to say, we did not end up getting to see the waterfall. If you like to hike, I would definitely plan a trip to the waterfall in your schedule for the day. The little bit of scenery we were able to take in was so breathtaking that I can only imagine how cool a hike to the waterfall would be.

If you go, please let us know what we missed out on.

Much smaller and newer than Mati Temple, the Thousand Buddha Temple was constructed during the Yuan dynasty in 1271-1368. This temple, also carved out of the cliff face, consists of just 2 floors and only a few different sculptures. The real treasure here is how the cliff face is pockmarked with thousands of tiny holes and grottos, like a Swiss cheese mountain. The area doesn’t take long to explore, but you could easily marvel at the landscape for hours.

How to Get to Mati Si Scenic Area

1. Fly to Jiayuguan or Lanzhou + Train to Zhangye City

Your home base for exploring Mati Si is the city of Zhangye in Gansu province. Zhangye is a little bit off the beaten path to get to so you’ll most likely have to take multiple forms of transportation just to get to the city. Zhangye does have an airport, but it’s tiny and extremely difficult to find a flight there. You will most likely have to fly into Jiayuguan, a neighboring city 220km northwest of Zhangye.

Jiayuguan is the city where the Great Wall of China ends, so if you have time you should definitely go see the Great Wall and fort at Jiayuguan (just to name a couple attractions) while you’re in the area.

From Jiayuguan your best bet is to take a train to Zhangye. Trains leave from the Jiayuguan train station heading to Zhangye approximately every hour. You can check train schedules on Ctrip here, or download the China Trains app on your phone.

There is no need to book your train tickets ahead of time unless you are traveling on a holiday. As this area is not a super popular tourist destination (yet), we had no trouble showing up at the train station and buying a ticket for the next scheduled train to depart. We never had to wait more than an hour to get on a train.

There are two different trains that run between Jiayuguan and Zhangye leaving from two different stations, a high-speed train and a slow train. The high-speed train departs from Jiayuguan South Station and arrives at Zhangye West Station 1.5 hours later. The slow train departs from Jiayuguan Station and arrives at Zhangye Station 1 hour and 45min – 2.5 hours later depending on the train. Ctrip will tell you how long the ride is on their website.

Mati Si is located 65km south of Zhangye City with no bus service to the area. Your best bet will be to hire a driver to take you to the temple and back for the day. Expect to pay 300 RMB for a day trip to Mati Si.

How to Find a Driver

When we were in Zhangye in late March/early April every taxi driver and their millions of friends (it seemed like) wanted to drive us around for the day. Literally every taxi driver we got in a car with immediately asked us if we needed a driver to go sightseeing. But, if they don’t volunteer ask. If they’re busy, they’ll call one of their friends and arrange everything for you. Super easy.

Oh, and no worries about having to sit for an hour in a beat-up taxi. They’ll switch out the city taxi for a nice car or SUV when they come to pick you up.

70 RMB for both temples, Mati Si and Thousand Buddha

You’ll need to keep your driver around to transport you to all the different sections of Mati Temple. From the Thousand Buddha Temple at the entrance to the furthest King Gesar’s Palace and hiking area is 13km apart. You’d never get to see it all if you tried to walk it. Our driver simply waited in the parking area at each of the temples until we were done sightseeing, then took us to the next spot. If you want to get out anywhere along the way to take photos or explore, just ask.

With the hike/horseback ride to the waterfall, you’ll need all day to explore Mati Si. If you’re just interested in the temples and not the scenery you can do it in half a day.

There are tons of hotels in Zhangye City, but not all of them accept foreigners. We used Agoda to book our hotels for this trip as it tells you explicitly under each hotel whether or not they allow foreigners to stay, making it really easy for us to know which hotels we should book.

You can check availability and latest prices here.

Ready to explore one of the world’s most unique temples? Discover the hidden gems of Mati Si and immerse yourself in Tibetan culture right in the heart of Mainland China. 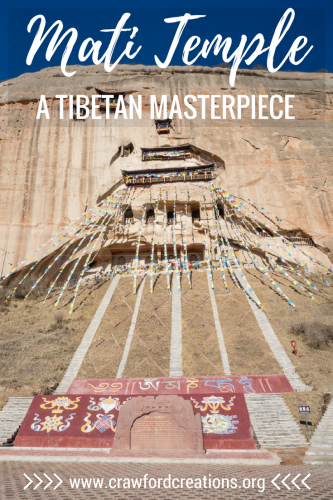 * This post contains some affiliate links. By purchasing a product or service through these links you are helping to support this blog at no extra cost to you! We only recommend products we personally use and love!