No Chinese? No Problem: The Easiest Places to Travel in China If You Can’t Speak Chinese

The language barrier is by far the biggest reason people are scared or worried about traveling in China, and for good reason. The majority of Chinese nationals can’t (or won’t) speak English, crazy considering they learn the language for 12 years in school. This shouldn’t stop anyone from traveling in China though, as it’s a huge country with many places where you can get by solely with a command of the English language.

If the language is scaring you off from visiting China, here’s some tourist friendly places to help you dip your toes in the water without drowning.

This one probably seems obvious, and while Hong Kong is not “the real China” as it’s not fully integrated with the mainland, it’s a great place to experience Chinese culture and food in a very international friendly atmosphere. As Hong Kong was a British territory up until 1997, English is widely spoken among the locals making it easy to get around on your own.

You also don’t need a visa to travel to Hong Kong which saves you the headache of having to get a tourist visa for the mainland. Despite their small size, the islands of Hong Kong offer incredible diversity, from the bustling metropolis of Central to the mountainous and sparsely developed Lantau Island, the fancy designer stores, and the teeming night markets there really is something for everyone.

Some of the most popular tourist attractions in Hong Kong include Victoria Peak, Hong Kong Disneyland, Tian Tian Buddha on Lantau Island, Man Mo Temple, Star Ferry Harbor Cruise, and of course all of the many street markets and restaurants throughout the city. If you’re an avid outdoorsman/woman you also can’t miss the amazing hiking on Lantau Island and in Hong Kong’s New Territories.

Macau is yet another international island metropolis belonging to China. Like Hong Kong, it was once a European colony, ruled by Portugal until 1999. The city is famous for its casinos, touted as the “Vegas of the East”, although it actually grosses more income from gambling than Vegas. I guess it makes sense considering that the citizens of the most populous country in the world love gambling, but it’s illegal on the Mainland, so the former Portuguese island offers a huge draw for Chinese tourists.

Due to its history of colonization by a foreign nation, Macau is no stranger to the English language, although admittedly its command of the language is not nearly as good as that of Hong Kong. That being said with its casinos being such a large tourist attraction, and its open borders (like Hong Kong you do not need a visa to visit Macau) the islands have become a hub for international travelers, making English a necessity in the region.

Popular tourist sites in Macau include the Ruins of St. Paul, Senado Square, the Macau Tower (home to the highest bungee jump in the world), and of course the many posh Casinos scattered around the city.

Shanghai is the hub for international business in mainland China and acts as a jumping off point for foreign companies looking to gain a foothold in the Chinese market. As a result, the city sees lots of “foreigners” from both the business and tourist perspective. With such an influx of international visitors, English has become pretty common among the locals.

While not everyone will be able to communicate with you, in Shanghai you won’t be too hard pressed to find someone to point you in the right direction on your travels. Some popular sights to see in the city include The Bund, Nanjing Shopping Street, the Yu Garden, and the Jade Buddha Temple.

Also worth a visit is an area just west of Shanghai known as the “Land of Lakes” or as the “Venice of the East”. The area is filled with ancient water towns where the main form of transportation is via boat through the many canals snaking their way through the towns.

The most well known and tourist-heavy destination on the mainland by far is Beijing. No surprise being as this is China’s capital and the most accessible place to see the famous Great Wall of China, the most popular tourist attraction in the country. As the country’s capital as well as the biggest tourist destination in the country, Beijing-ers are pretty well versed in English and the tourist attractions, hotels, and restaurants are used to dealing with “foreigners”.

Beijing is unique in the fact that although it has blossomed into one of China’s mega cities with a population of 20 million, it has still managed to maintain it’s cultural heritage. Within the metropolis, there are ancient towns known as Hutongs where you can walk back in time to what China used to look like hundreds of years ago. The city is also home to numerous ancient temples, the most famous of which is the Temple of Heaven. Outside of the city limits, you’ll find some of the most beautiful mountain countryside perfect for hiking and biking.

Some must see sights in Beijing include The Great Wall, Forbidden City, Tiannanmen Square, the Temple of Heaven, and the Summer Palace.

After Beijing the second most well-known tourist destination in China is Xi’an, home of the famous Terracotta Warriors. Xi’an is a huge tourist destination for both international and Chinese tourists, and as such it’s designed to be more welcoming to outsiders.

While English is not as widely spoken here as it is in Beijing and Shanghai, you still won’t have much trouble getting around without Chinese. The tourist attractions are clearly marked and easy to find, and you can navigate them without a guide, although one can be useful if you’re interested in learning the history behind what you’re seeing.

Popular attractions in Xi’an include the Terracotta Warriors, hiking Huashan (“the world’s most dangerous hiking trail”), walk or bike on top of the city wall, Muslim Street, the Wild Goose Pagoda, and the Drum Tower.

Guilin is a place home to some of the most stunning natural scenery in the world. Its vistas are so famous they are even pictured on China’s 20 rmb note. The landscape of Guilin is composed of dramatic peaks of karst mountains sliced by meandering rivers. The karst mountain formations offer nature the perfect foundation for cave formation, of which Guilin has some of the largest in the world.

The mountains, rivers, and caves of Guilin draw thousands of tourists every year who come to marvel at nature’s creations, hike and bike through the mountains, ride down the river, and walk through the caves. The sheer amount of both international and Chinese flocking to the city make it a very tourist friendly destination.

Guilin was the first place we visited after coming to live in China. We had been here only 6 months and spoke very little Chinese, but there was really no need for any Chinese as people at all the restaurants, hotels, and tourist attractions we went to spoke English. The area was super easy to navigate on our own making it a must visit destination for a traveler looking to see some amazing natural scenery in China.

The most popular tourist attractions in and around Guilin are the Li River, Longsheng Rice Terraces, Reed Flute Cave, Moon Hill, Seven Star Park, Xijie Pedestrian Street, and the Sun and Moon Pagodas.

Last on our list is Chengdu, home of China’s iconic giant panda. Chengdu and it’s surrounding area is the only place left in the world home to wild pandas. As the panda’s only remaining natural habitat Chengdu is also the only place where you can visit a Panda Breeding and Research Center where they work to breed and rehabilitate pandas for release into the wild.

The pandas are a huge tourist draw for Chengdu. These fluffy black and white bears have a serious cuteness factor and are entertaining as all get out. While they’re big and seemingly clumsy on the ground, these hundred pound bears can somehow climb a tree and fall asleep on the tiniest tree branch without breaking a branch or falling out of the tree. It’s dumbfounding.

Everyone wants to see the pandas, making Chengdu another one of the major tourist destinations in China. As with all major tourist destinations, it’s pretty easy for us “foreigners” to get around on our own. However, as Chengdu is inland, situated on the cusp of China’s “Wild West”, it’s not quite as easy as the previously mentioned places to get around solely using English. The people at the hotels and tourist attractions will speak pretty good English, but restaurants and shopping might require some miming and hand gestures.

Some must-see attractions in and around Chengdu include the Chengdu Giant Panda Breeding and Research Center, Leshan Giant Buddha, Mt. Emei, Jinli Ancient Town, and the Tibetan Quarter.

Are you inspired to travel to China yet? Come join us! 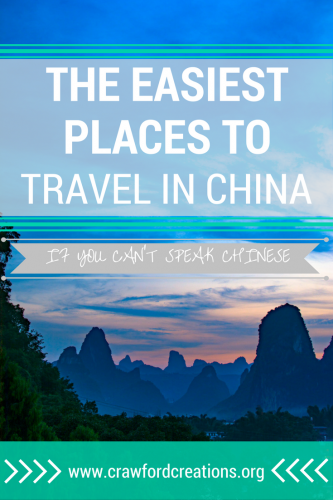 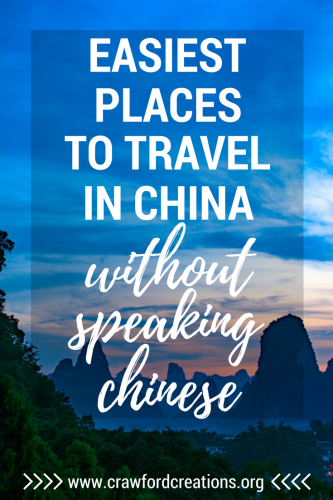