* This post contains some affiliate links. By purchasing a product or service through these links you are helping to support this blog at no extra cost to you. We only recommend products we personally use and love!

Bingou Danxia or Ice Valley as it translates in English is basically the overshadowed younger sister to Zhangye’s Seven Colored Mountains (Rainbow Mountains). The poor thing was just recognized as a national park in 2014 and has received none of the hype and fame that its neighbor, the Rainbow Mountains gets without even trying. But, who doesn’t love an underdog?!

While there are no flashy colors, Bingou Danxia Geological Park makes up for it with the most out-of-this-world rock formations we have ever seen. Nature, you are a bomb ass artist my friend.

The most prominent rock formations are, shall we say, rather phallic in nature, or, for those who don’t have their mind in the gutter, basically look like mushrooms on steroids. Among the mushrooms, you’ll also find a couple camels and an elaborate nature-made carving of the Louvre. Or was the Louvre designed based on the rock formation? I guess we’ll never know.

As with its famous older sister, the Rainbow Mountains, Binggou Danxia was formed over millions of years of tectonic movement and natural erosion of the local sand and mudstone soil. The land composition in Zhangye makes it particularly susceptible to erosion creating unique rock colors, formations, and caves like nowhere else in the world. The geography in this part of Gansu province is pockmarked with carvings and caves all formed by the hand of nature.

Binggou tops the list when it comes to danxia sculptures. But what exactly is “danxia”? Well, it’s a weird Chinese term with no technical definition or translation (typical) that basically describes steep cliffs of rock composed of a red stone. The danxia landscape is completely unique to China and is formed only from red sand/mudstone that has been shaped, molded, and eroded over millions of years creating isolated columns and ridges of rock.

Why You Should Totally Go Check Out Binggou Danxia

Honestly, the best reason we can give you is that it’s just really freakin cool! I mean, who doesn’t want to walk around a park filled with phallic…uhh I mean mushroom, shaped rocks? Definitely not something you see every day…or any day, except here, because this is the ONLY PLACE IN THE WORLD you can see these kinds of rock formations.

And I’m not talking like, just a couple small sculptures, or even just 1 mountain, no no, this place is 40 kilometers long with numerous hiking paths and viewing platforms.

The second best reason? NO TOURISTS! Yup, you read that right. This place is so new to the tourist arena and so overshadowed by the Rainbow Mountains that it flies right under the radar. I mean what better reason to go now before it gets popular. Binggou Danxia was only opened to the public as a park in 2014 so get in now while it’s still a new and up-and-coming destination and you can admire nature’s artwork tourist free!

Have we convinced you yet? Yes, then let’s go! 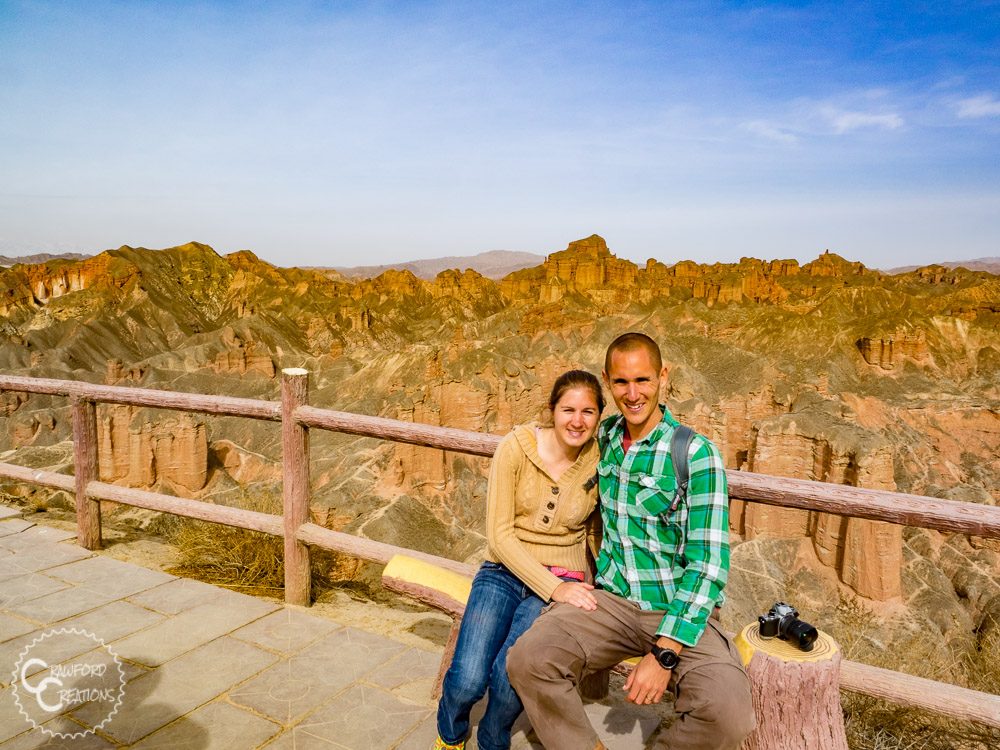 How to Get to Binggou Danxia Geological Park

1. Fly to Jiayuguan or Lanzhou + Train to Zhangye City

Your home base for exploring Binggou Danxia is the city of Zhangye in Gansu province. Zhangye is a little bit off the beaten path to get to so you’ll most likely have to take multiple forms of transportation just to get to the city. Zhangye does have an airport, but it’s tiny and extremely difficult to find a flight there. You will most likely have to fly into Jiayuguan, a neighboring city 220km northwest of Zhangye.

Jiayuguan is the city where the Great Wall of China ends, so if you have time you should definitely go see the Great Wall and fort at Jiayuguan (just to name a couple attractions) while you’re in the area. 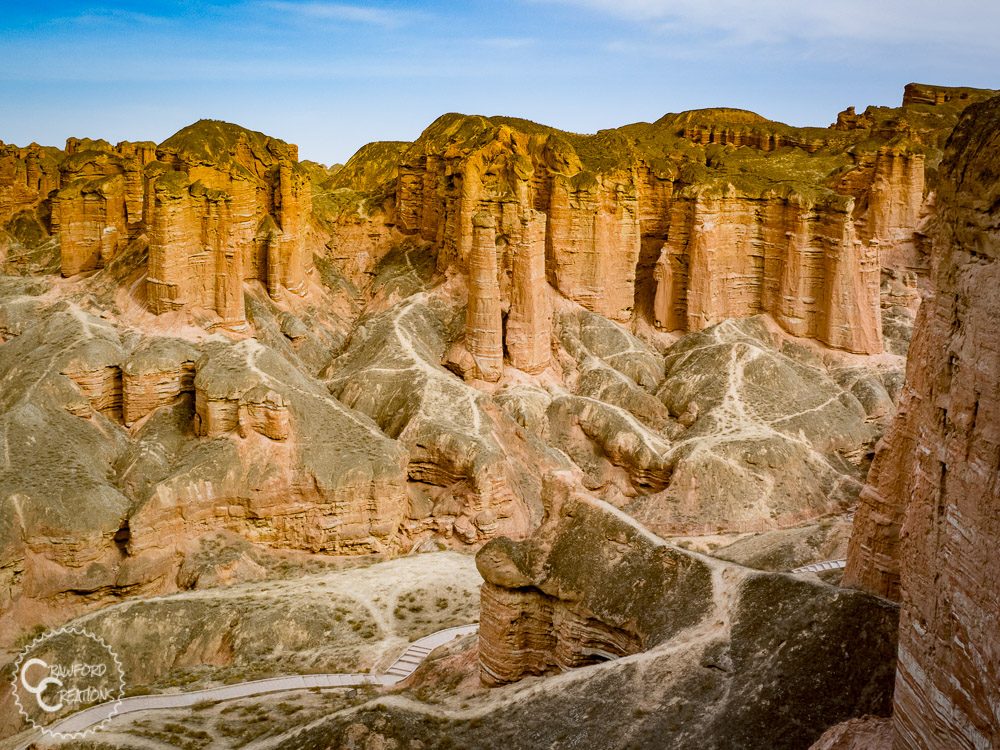 From Jiayuguan your best bet is to take a train to Zhangye. Trains leave from the Jiayuguan train station heading to Zhangye approximately every hour. You can check train schedules on Ctrip here, or download the China Trains app on your phone.

There is no need to book your train tickets ahead of time unless you are traveling on a holiday. As this area is not a super popular tourist destination (yet), we had no trouble showing up at the train station and buying a ticket for the next scheduled train to depart. We never had to wait more than an hour to get on a train.

There are two different trains that run between Jiayuguan and Zhangye leaving from two different stations, a high-speed train and a slow train. The high-speed train departs from Jiayuguan South Station and arrives at Zhangye West Station 1.5 hours later. The slow train departs from Jiayuguan Station and arrives at Zhangye Station 1 hour and 45min – 2.5 hours later depending on the train. Ctrip will tell you how long the ride is on their website.

2. Take a Car to Binggou Danxia

The park is located 40km west of Zhangye City and just 10km down the road from its sister park, the Rainbow Mountains. There is no bus transportation to this park as it doesn’t currently have the popularity to warrant a route.

Expect to pay your driver 300 RMB for a trip to Binggou Danxia. 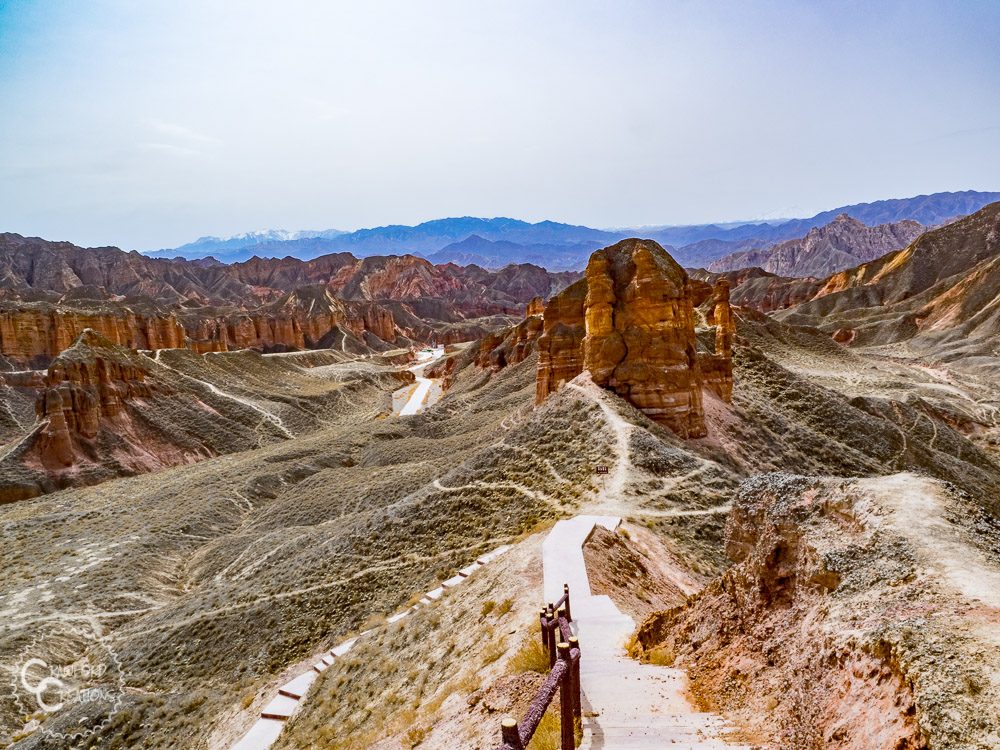 How to Find a Driver

When we were in Zhangye in late March/early April every taxi driver and their millions of friends (it seemed like) wanted to drive us around for the day. It basically works like this. Inevitably you will have to take a taxi from the train or bus station to get to your hotel. By the end of your ride, the driver will probably solicit you for their driving services to take you to all the tourist attractions the next day. If not, ask. If they’re busy, no worries, they will, without a doubt, arrange for one of their millions of taxi driver friends to drive you instead.

Somebody will be free and would love nothing more than the honor of driving a car full of foreigners! … I’m totally serious, Chinese drivers love foreign tourists and our lack of Chinese language skills. It means we’re far less likely to quibble over prices and they can charge us more (unfortunate for us, but it will still be cheap so no worries).

Also, somehow, the driver’s beat up taxi transforms into a shiny new SUV when they come to pick you up. This happened every single time when we were traveling around Gansu Province. I have absolutely no idea where they get these nice cars from, but hey, no complaints. 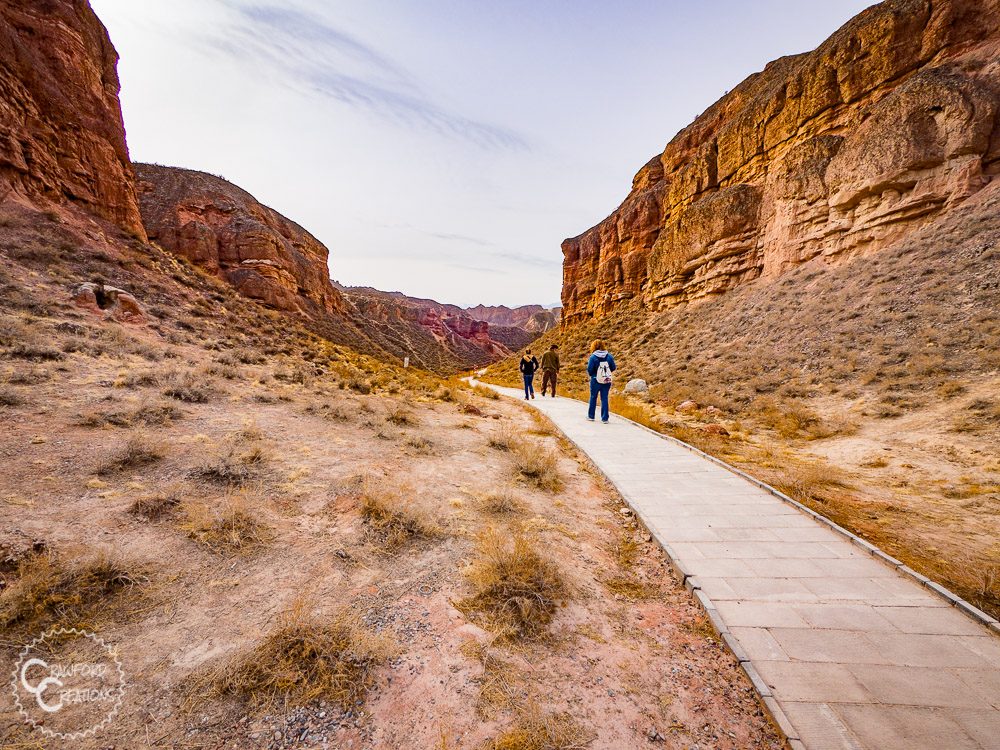 How to Get Around Inside the Park

Binggou Danxia Geological Park is divided into 2 sections with minibus transport between the 2.

Free minibuses wait at the main gate to take tourists inside the park. The actual park is not connected to the entrance gate but is located a couple kilometers down the main road. Kind of a weird set up if you ask me, but whateves.

Once you buy your ticket and get on the mini bus it will drop you off at the first walkway into the park where you can start hiking. Paths diverge multiple ways climbing up and down the mountains and ending at specified viewing platforms.

You can also walk along the dirt paths in the corridors between the rock columns. They’re not marked paths, however, and, how shall I put this, not really meant for tourists, but no one will yell at you for walking off of the designated concrete walkways. It’s a bit like the wild west though, no one’s there to stop you from going wherever you want, but just, ya know, be smart about it and don’t get lost.

Once you’ve finished exploring the first section of the park, walk back to the entrance where the minibus dropped you off. There will be another bus waiting, and, when full, it will transport you to the next section.

It’s section 2 where you will see nature’s depiction of the Louvre, as well as a larger-than-life sized camel, carved out of the rocks. Both sections have pathways climbing the mountains that consist of lots of steep staircases, so keep this in mind before you go to visit. As (in our opinion) with every climb, no matter how hard it is the views are always worth it from the top, and nowhere is this more true that in China’s Danxia Geological Parks. You can really only truly appreciate them from above.

It took us about 2 hours to get through the whole park. Counting the time to get there and back Binggou Danxia took up a nice morning, which was perfect for us as we had to leave Zhangye and head back to Jiayuguan in the afternoon. If you have the entire day you can combine Binggou Danxia with the Rainbow Mountains or see some of Zhangye’s city sights in the afternoon.

Anytime from April – October when the weather is comfortable and the sun is shining.

Avoid visiting in the winter time when the weather is brutally cold and often below freezing. We lucked out with our visit at the end of March/beginning of April but a week or so after leaving they got snow and the temperatures plummeted! Head to the region in the summer or early fall for more guaranteed nice weather.

Where to Stay in Zhangye

There are tons of hotels in Zhangye City, but not all of them accept foreigners. We used Agoda to book our hotels for this trip as it tells you explicitly under each hotel whether or not they allow foreigners to stay, making it really easy for us to know which hotels we should book.

You can check availability and latest prices here.

Experience Binggou Danxia Geopark for yourself and get off China’s beaten path!

As one of the only tourist free tourist destinations in China this is definitely a must visit place for a relaxed tour of one of the most unique landscapes in the entire world. Come see for yourself, before the word gets out! 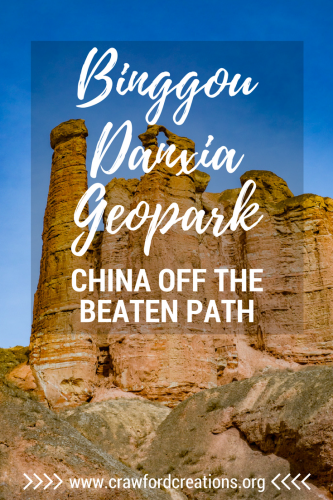 * This post contains some affiliate links. By purchasing a product or service through these links you are helping to support this blog at no extra cost to you. We only recommend products we personally use and love!