On April 22, I started the epic trip to Maotai for the start of the 1st Annual Zunyi Chishui River Valley International Cycling Race. I got the call in the morning to find out my flight was cancelled, so I returned the call and after several attempts got a flight out of Guangzhou instead of Zhuhai that would arrive to Guiyang 贵阳 at 5:00 pm. So I left work at 10:00 am to drive the 3 hours to the new airport as opposed to 30 minutes to Zhuhai airport. Everything was smooth in there and when I finally arrived to Guiyang, I met with one other cyclist that I would be racing with, Hannes from Germany but living in Shanghai, and we got on the bus to go to Maotai where the race was to start. We had the bus all to ourselves and it was about another 3 hour drive to arrive there. This was a full sized charter bus with 2 people on it!

Finally we arrived! We got off the bus brought our bikes to the garage and assembled them and then went into the sweet 5-star brand new Maotai International Hotel where we had a fabulous room that we would see for 8 hours. We got to meet one of our teammates this night as well, Jake, who was the team leader for our Natooke team. He told us of all the rules: race starts at 10:15, be out of hotel at 7:00, breakfast at 6:30… It was nice to have someone that knew what was going on, as in traditional Chinese fashion, the event is fairly well organized, but they do not let anyone know what that organization is. You just kind of go with the flow and expect they will tell you at the last minute where your bike and things need to be.  We made it to our room at 10:00 pm and then ordered food to the room as we hadn’t had dinner yet. For a 5-star hotel, the food was abysmal, but I can’t complain as it was complimentary from the race.

We got up the next morning and were dressed ready to go at 7:00 am and off to breakfast. It was a maze of hallways to find where the breakfast was and it was a huge spread of both traditional Chinese foods and international/Western style breakfast. I was able to find some food to eat and was ready to get on the bike. I had hoped to ride on Friday in Maotai since it looked like a beautiful town tucked away in the mountains, but I certainly did not have any time arriving at 9:00 pm. Hannes and I had breakfast with our 4 other teammates from Chengdu. It was nice to meet them, as the Natooke team we were racing for was a composite team of “local foreigners” or foreigners living in China. After breakfast we packed the bike bags on the trucks, threw our extra bottles and food in the follow car for our team, and we went out to find some nice roads to ride and warm up on before the race was to start.

The town of Maotai is home to the world famous Maotai baijiu (白酒, white wine, Chinese liquor). This liquor is super strong, usually 100+ proof and tastes like paint thinner. The town, however, is a beautiful location nestled in a valley in the mountains. There were green peaks all around that reminded me of the landscape I remember from Macchu Picchu a couple years ago. I really wish we had more time in this location to explore as it looked wonderful and had plenty to explore outside of the race.

The 1st Annual Zunyi Chishui River Valley International Cycling Race was quite the show. It was sponsored by Maotai baijiu.   There were 3 races on the day, an all-Chinese pro/am 150 km race that started at 9:55, an all-foreigner elite 150 km race that started at 10:15, and a mountain bike 90 km race that started last. We were obviously racing the Elite all-foreigner race. The promoters brought in foreigners from all over the world with teams from New Zealand, USA (though we all lived in China), Germany, the Netherlands, Serbia, Uzbekistan, Indonesia, and a few others. In total there were 11 teams of 6 for the elite men’s race. There was the prerequisite opening ceremony that was 45 minutes long full of government leaders and promoters all speaking in Chinese with an English translator. And then it was race time.

Promptly at 10:15 we were off! The race started going through the town of Maotai along the river with one big German that went to the front and drug us along at top speed. I couldn’t help but look at the scenery as we raced along because this was by far the most beautiful race I have ever done. We raced for 150 km down a river gorge/valley. Most of the race was through undeveloped countryside, but it also raced through the small towns that lined the river as it went along its length. Racing along the river gorge the mountains were about 600m high on either side of the river covered in green. We raced through forests of trees and other areas that were forests of bamboo. One area was called zhuhai 竹海, which means bamboo sea. We also raced along the cliff faces of the gorge that were surprisingly clean. We were racing downstream, so it was a rolling downhill race with only one significant climb that came at 50 km in. Even though this climb was only 5.5 minutes long, the peloton went from 66 guys down to about 30 guys going over the top. The speed up the climb and on the subsequent downhill was very high which put me on the rivet for about 15-20 minutes as we raced away from the chase groups. No one dropped on the climb ever made it back to the main field, so I felt good to make it over with the main field after not racing in any real races since 2014. After the pace eased back a little bit the remaining 90 km went by with constant attacks flying. Every attack was strong and would take a group away for a minute or two before we would chase them down. At the catch, the peloton would sit up and then another attack would fly within a few seconds. It raced like this all the way until about 20 km to go when a group of 6 got away and finished about 30 seconds in front of the rest of us. I was watching my computer, counting down the kilometers to go, to make sure I knew when the finish was, since this was the first point to point race I have ever done that I didn’t already know the finish. Coming into the finish, we all seemed to be getting tired, and my legs started to tighten up and start cramping. The final kilometers sped up as every race does and the final sprint opened up with 300 m to go. I was positioned okay for the final sprint, but with minimal legs and trying not to cramp I didn’t go forward at all with my sprint, ending in 24th place out of 66 in a time of about 3:45. 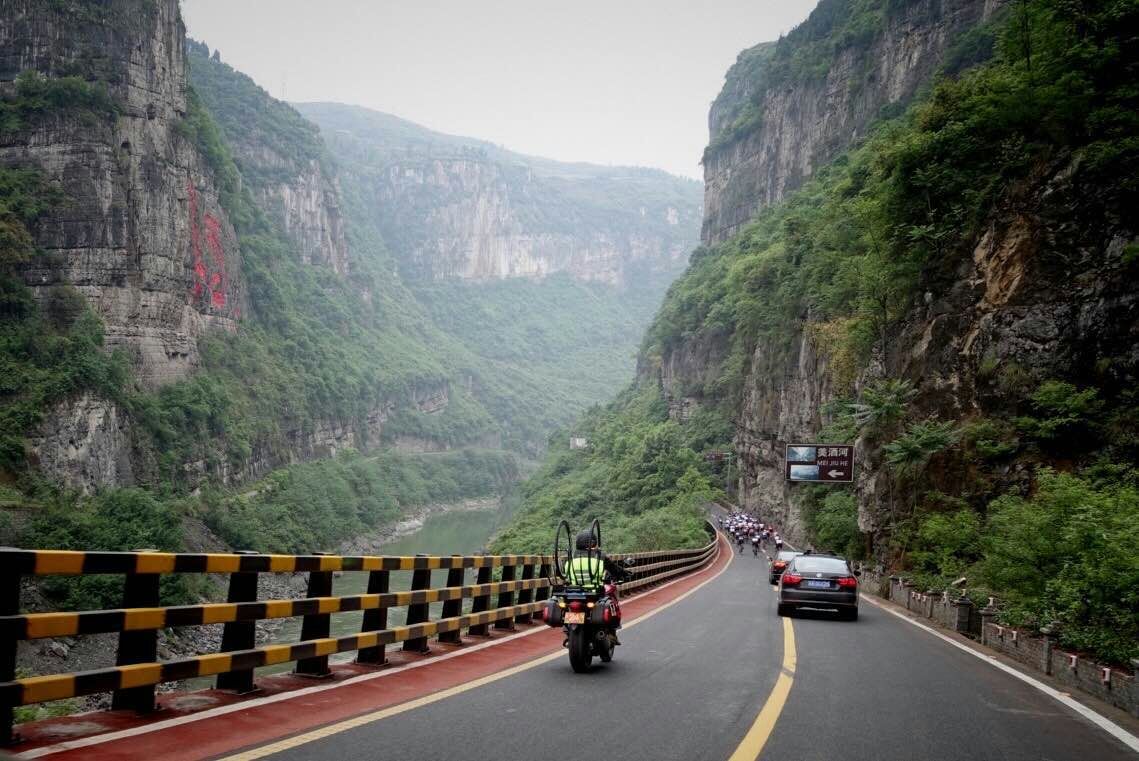 I was very happy with my finish from the race. I finished in the money since it paid 25 deep making 540 RMB for 24th place. The winning team from Germany took home tons of money. For my first long fast road race since 2014, I felt very strong and am excited for the possibilities of racing in China. I am disappointed that Guangdong province does not have much of a bike racing scene. I learned from my new friends, that Shanghai has races that you can do almost every weekend during the racing season. We will see where the racing season takes me this year, but I hope to participate in some more large races this year.

After the race finish for the peloton, racers continued to straggle in over the next hour. We were then all shepherded to the new host hotel, where I got to take a quick shower, eat, and learn that we were not actually staying there that night, but being taken by bus up to Chongqing 重庆 where we were flying from on Sunday afternoon. We left Chishui around 5:30 pm and headed to Chongqing, but did not arrive to our hotel until 10:00 pm again. Needless to say I was tired of traveling at this point, but we had a good dinner. David, Hannes, and I went riding on Sunday morning around Chongqing. It was a nice ride after we finally left the construction zones of town. It was a drizzly day of about 15C, so not too cold, but certainly not warm. When we did get out of town we had a beautiful winding descent and then a nice 20+ min climb up the other side before rolling around in the countryside for 1.5 hours. We made it back to the hotel at 1:00 pm after a beautiful, albeit dirty ride. After cleaning and packing our bikes we went to the airport, checked in, had a final meal together at KFC, and then headed our separate ways to return home after a fun-filled weekend.