While Cara was a galavanting around the globe (hanging out in the beautiful Tagong), I had the pleasure of hosting another very interesting Warmshowers guest.

It is always enjoyable to host new people, to learn their story, how they make the trip happen, and what their future plans are.

Do we all need a plan, or should we just strike out and see what happens?

I don’t think there is an answer to this question, however, our Warmshowers guests can give us and you some insight into long-term traveling.

Our latest guest was Yeachan Leo, from South Korea. His story was like many others we have hosted over the years. He graduated college with a degree in mechanical engineering, so was immediately employable, but the pull was not there for work. The pull, the drive that makes us enjoy waking up in the morning was to see the world.

To that end, Yeachan headed to Australia for 2 years of working holiday. For those of you in the US, the working holiday is an arrangement between countries where you can easily get a work visa without prior employment in the country and come, live, and work for a few years. Yeachan was able to land a job in Australia that was work for 6-months, travel for 6-months and continued like that. He completed 3 work sessions then decided to strike out on his own. During that time, his English improved tremendously and we had no problem communicating. His touring blog is in Korean though, so I have not been able to read it.

He could have returned to South Korea and started work, but decided to take his bike to China and start bike touring. The Chinese visa allows 90 days in-country before you must leave, so he was in-country for 89 days before escaping to Hong Kong for a visa renewal and then coming across the delta to Zhuhai and staying with me.

His trip started up in Qingdao and followed the coast down to Shanghai and Hangzhou before heading inland to visit Zhangjiajie. He also visited Huangshan and one other of the sacred mountains in China.

His trip was quite inspiring because he was doing it all. He got to ride his bike from place to place. Sometimes it was days on end of riding. But other times he hung out in a single place for 4-5 days and hiked and enjoyed the locale. I would love to do that some day.

He spent 5 days in Zhangjiajie to visit and also because of the monsoon like rains that were flooding the roads and made it impassable to ride to Hong Kong. He ended up taking the train for much of the distance. 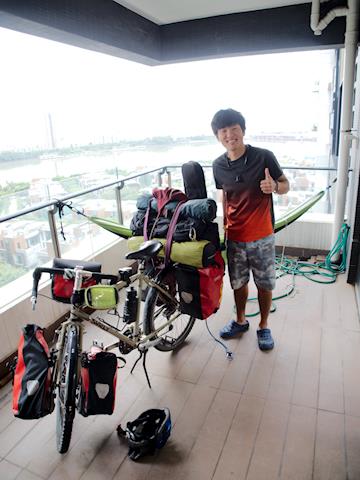 What made Yeachan different from all the other tourists we have hosted over here in China is he was camping. He said he normally camps 4 out of 5 nights with the remaining nights staying in cheap hostels or warmshowers hosts if available. He would just ride along until he found a suitable place to camp for the night. I didn’t get nearly enough time to talk with him about camping in China because he didn’t make it to our apartment until 9 pm and he left with me at 6:30 the following morning. However, the fact that he was able to camp in China was remarkable. Everything you read

He was able to just pull off the side of the road when he saw an opening and camp. He said he has never been bothered and he has been doing this for 3 months. What a record! There is certainly a technique to stealth camping, basically pull off far enough so you are not seen and all will be okay.

Yeachan was not carrying the heaviest set of gear I have ever seen, but he was far from the lightest. Actually, the only couple we have hosted that has carried more gear than he was the one pulling a trailer with their parachute kite and wakeboard along with their guitar and other gear.

Yeachan had a special rack mounted behind the rear tire that he had his guitar strapped to. It was like nothing I had ever seen. Unfortunately for him, both of the struts holding it out there had broken and he had it supported only by tape. I could do nothing to improve that situation, but the best bike shop in Zhuhai, my personal bike room, was able to fix up his brakes and supply him with some spare bolts to make sure he could fix things along the way. 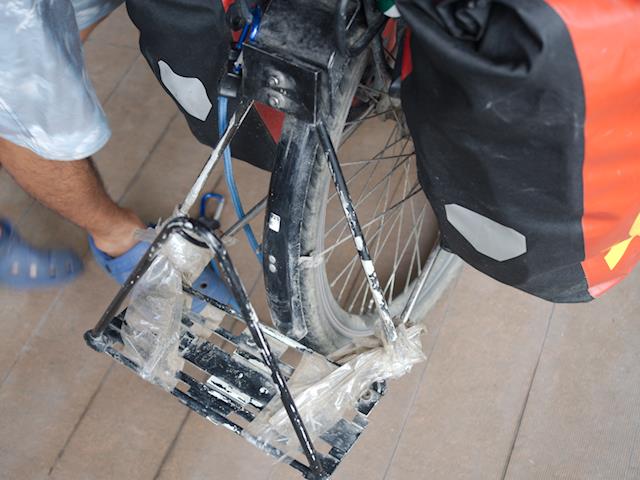 He was rolling the gold standard in panniers and handlebar bag, the Ortliebs. If you surveyed all the long term touring cyclists on which panniers they would suggest it would be 80+% recommending Ortliebs. They work very well, keep everything dry, mount securely, remove easily, and last a very long time.

He was riding a Surly with bar end shifters and regular cantilever brakes that I fixed up for him. Before he could barely stop, but now at least he is able to squeeze them to death and get some grip.

To go along with his 4 panniers and the handlebar bag was a veritable mountain of stuff on top of his rear rack. I believe it was his tent, sleeping pad, clothes, etc along with his guitar being strapped to the special rack in the very back.

In total, he was rolling 60 kg of gear for himself, not including the bike which weighed in at 17 kg or water/food weight while traveling. To put that in perspective, Cara and I rolled with 69 kg total on our Himalayan tour last fall on our tandem.

One interesting question I always ask our guests is how do they afford their trip. Yeachan had a response that is similar to many millennials that have been bitten by the travel bug. He saved money during his time working in Australia and plans to tour indefinitely until he runs out of money. At that point, it will be head back to South Korea and start his corporate career as an engineer. Who knows, maybe he will figure out how to make some money while he is traveling and never return to work the desk job…

For now, he is headed on to Vietnam and then touring through Southeast Asia before heading ultimately towards Europe.

Best of luck to him. It’s always a pleasure to host touring cyclists and share stories of our adventures.