Nothing embodies the spirit of summer like playing in the water.  And nothing kills that spirit more than living at a beach that is too nasty to swim in (pollution, China, you know where I’m going with this).  Thankfully, Zhuhai is home to a host of islands right off the coast with lovely blue water that just beckons for a swim.  Our island of choice for the weekend was Shangchuan Island, the largest island in Guangdong province.

With our tandem bike in tow, we hopped on the Friday evening ferry out of Jiangmen and arrived at Shangchuan Island 40 minutes later.  Having brought our own transportation, we skirted past the buses and rode over the mountain to the resort beach area (I use the term resort lightly, as they are really just hotels on the beach).  Little did we know you actually have to pay 54rmb to enter the “resort-y beach” area, however, as we didn’t come on the bus and had nothing with us besides small panniers on the back of our bike, we looked as though we had already been there and were just out for a ride, and got to go through the gate sans fees.

In our typical style, we didn’t book a hotel ahead of time (we like to see the place in person when dealing with Chinese hotels as they can be a bit dodgy) and meandered the streets sizing up our hotel choices and comparing prices.  After some bargaining, one of Justin’s favorite activities as it puts his frugality to good use, we settled on a price and a room.

Next stop was dinner, at one of the many delicious seafood restaurants along the water.  They served us up an amazing steamed fish with a side of eggplant and we both went to bed with happy tummies.  This is our fourth Chinese island now, and I have to say, one of the best parts about them is all the delicious seafood, so fresh and still swimming and jumping (in the case of the shrimp) in their tanks.

Walking back to our hotel we noticed a particularly unusual seafood item hanging out in a tank at one of the restaurants: sea turtle.  We walked over for a close-up, and sure enough, the poor thing was just hanging out, constantly pushing up against the tank and peaking his cute little face up for air.  The very western animal lover side of me came out in full force as I immediately pictured Squirt from Finding Nemo and his cute little face being trapped in a tank.   Poor Squirt!  Totally inspiration for the next sequel in the Finding Nemo series by the way, “Finding Squirt” (you’re welcome for your next big hit Disney Pixar).  Oh yea, and did I mention the fact that according to the World Wildlife Fund “Nearly all species of sea turtle are classified as endangered”?  Right.  Not cool China.

The next day we were off on our bikes first thing to explore the island.  It’s quite an easy one to explore by bike as there is only one road that runs down the middle of the island from end to end, quite ideal for the directionally challenged, such as myself.  We headed out of the resort area back to the main road, and almost immediately starting climbing up a mountain, taking in some beautiful beach views as we ascended, and stopping along the way for a picture or two.

It wasn’t long before we descended the other side eventually ending on the tip of the island at a nature reserve.  Not wanting to pay the ticket just to ride through the reserve and out, we turned around and headed back over the mountain to the other side of the island.  We journeyed across rhythmic rolling hills and mountains and rode along the coast before hitting a big “granny gear” of a mountain with amazing scenic overlooks at the top.  After snapping some pictures we rocketed down the mountain back into town.  Totally worth the sweat before breakfast.

After a plate of hard earned grub, we headed beachside for some relaxation and waves.  The beach consisted of one small designated swimming area dotted with umbrellas and wooden beach chairs among a large stretch of coast, most of it, apparently just for looking at.  I was pretty sure we had to pay for the umbrella/chair combo, but I didn’t see any signs and no one seemed to mind when we sat down under an unused umbrella.  Apparently, they did mind, as after walking off to find some shells along the water, I came back to find Justin under a different umbrella.  We had inadvertently taken some else’s spot so they moved us, but still never made us pay, the perks of being a clueless foreigner I guess!

As I walked back out to the water, I noticed almost all of the Chinese were wearing life jackets, which were free for the taking at a stand on the beach.  I thought it was pretty insane, assuming that most of them probably couldn’t swim at all (or at least not very well) that they would even be going into the ocean at all, but I learned a long time ago not to question the Chinese logic, thus I become even more confused, so I just went with it.  I didn’t get but waist deep in the ocean before a lifeguard ran over to me frantically blowing his whistle.  Apparently, it wasn’t a choice, but a rule that if you wanted to swim in the ocean you had to wear a life jacket.  Sigh.  Sometimes I feel like the Chinese just ruin all the fun.

Back under the umbrella, we grabbed our shells and the rest of our things, and took a walk along the water to the end of the beach devoid of crowds and whistle happy lifeguards.  We intended to walk up to the six meter tall golden Buddha they built on the island but instead ended up climbing a small island out in the ocean that had become accessible due to the low tide.  At the peak of the one hilled island rested Shangchuan’s version of the “fisher girl” and an old lighthouse with an equally old ladder that lead to a platform at the top.  Swayed by what would be an unbelievably gorgeous view of the coast, Justin, the ever adventure seeker and risk taker, climbed up the ladder with the camera to capture the view.

After nightfall it was time for another delicious seafood dinner, this time opting for some shellfish, our choices being clams and shrimp.  So yummy once again, and it really couldn’t get any fresher as the shrimp were literally leaping out of the net as the waiter tried to weigh them.  I swear the higher they jump the better they taste!  With our bellies full and our eyes droopy we headed off to our room for an early bedtime and a good rest in preparation for our hundred mile bike ride back to Zhuhai the next morning.

How to Get There

Take the Shangchuan Island ferry leaving from the Chuan Island Port located at the Chuan Island Tourism Scenic Area 川岛国家级旅游景区 (chuāndǎo guójiājí lǚyóu jǐngqū) in Jiangmen 江门.  The port is pretty far away from Zhuhai taking about 1.5 hours drive, plus a 40 minute ferry ride to arrive on the island.  There are no exact ferry times as the boats leave when they are full, and they will send more or less boats depending on how many people are there.  The ferries start their departures from Jiangmen at around 8:00am and end service at 6:00pm.

Upon arriving on the island there is a bus parked right outside the ferry port that shuttles people over the mountain to the nice beach/resort area.  At the entrance to the tourist area, there is a lovely guarded booth charging a mandatory fee of 54rmb to enter.  This is the only area on the island with tourist accommodations so unfortunately, the fee is kind of unavoidable.

Search Shangchuan Island on Ctrip to book ahead, or book once you get there. 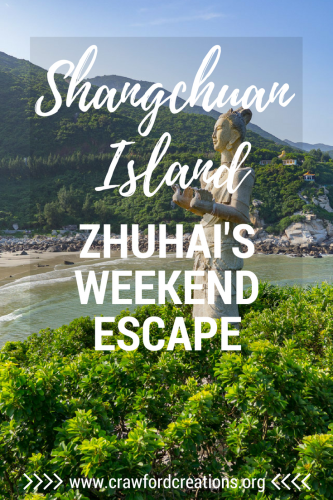